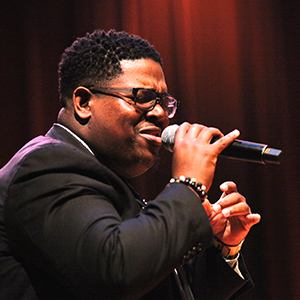 Reggie is a Cleveland native and Cleveland School of the Arts grad whose musical gifts have led him on an exceptional journey over the years, including working with accomplished artists such as Bobby McFerrin, and Smokie Robinson. After completion of his undergraduate studies at Howard University, he appeared on season three of NBC’s hit a cappella television show “The Sing-Off” as a contestant, arranger, and music director with Howard's vocal jazz ensemble Afro Blue (now Traces of Blue). This experience led him to found his summer A Cappella Camp in 2013 - and still going strong - which appeared on Fox 8 News’ Kickin’ It With Kenny. Reggie is an accomplished arranger in the a cappella and jazz communities, and his arrangements and performances have brought him recognition in DownBeat Magazine’s Student Music Awards over the years. He is an instructor of jazz voice at Cleveland State University, developing an inaugural course of study in the School of Music. Besides music, Reggie's other passion is cooking and he has his own vegetarian food business, Uncle Veggie's!