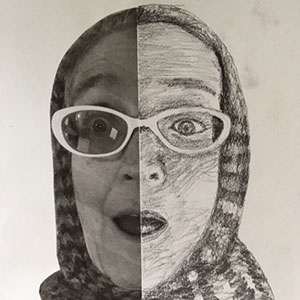 Born in Erie, Pennsylvania, Melissa Daubert created her first portfolio in 11th grade earning her a scholarship to study at Columbus College of Art & Design. Focusing primarily on 3D works, she received a BFA in Illustration. After graduation Daubert served as a Peace Corps Volunteer in Africa where she taught metalworking in rural Zimbabwe. Donning a dress, Daubert inspired the first female students in the school's history to study metal fabrication.

In 1995 Daubert joined the team building the Great Lakes Science Center in Cleveland, Ohio. A strong and visionary leader, she was responsible for the design and fabrication of numerous exhibits still part of the museum's permanent collection including Port Polymer, one of the museum's key areas for children.
In 2005 Daubert established Interactive Works of Art, a sole proprietorship through which she creates work locally, regionally and nationally for museums, hospitals, theaters, galleries, public spaces, private institutions and individual collections. Melissa has recently acquired her teaching certificate through the State of Ohio and is a full-time art teacher at Luis Munoz Marin School. Melissa was a BSMA teaching artist during the 2021-2022 school year at William Rainey Harper and also works in BSMA’s summer programs.