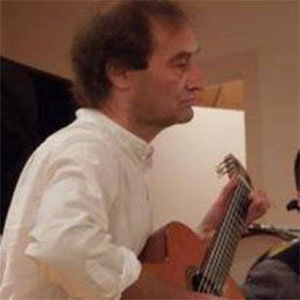 Mark studied organ, flute and classical guitar at Cuyahoga Community College before majoring in music theory and harmony. He also studied composition, advanced harmony, counterpoint and orchestration at Cleveland State University. He has been a composer and musical director in the film industry and has produced film soundtracks for The Hoods (1981) and other feature films as well as the CDs Another Listen is in Order (1989), Clearing the Air (1990), and his solo CD Umilenye on Latticesphere. records. He has taught at Beck Center for the Arts, the Bedford Schools, Cuyahoga Community College, Memphis-Ridge Music Center, the Family Learning Center for Music, and in the Cleveland Municipal School district. He was music director and performer for the Ground Zero Mime/Movement company from 1990-96, a performer in MorrisonDance modern dance company from 1999-2003 and toured and performed extensively across the United States with the Moscow Nights Russian folk ensemble on the bass balalaika.