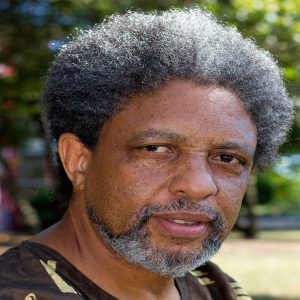 Born in Cincinnati, Ohio, James “Baba Jubal” Harris was exposed to Afro Caribbean drumming in kindergarten. At the age of 13 he became a student of Julius Renford "Flash" Ford. His drumming is inspired by both African and Caribbean rhythms. He is also a master drum-maker, practicing a traditional drum-making process that has been handed down from the Bambara and Mandinka peoples of West Africa. Harris led over 1200 drummers to honor Jesse Owens and to celebrate the 1996 Olympic Torch Relay in Worthington, Columbus and Cleveland, Ohio, establishing an American record. He was awarded the Ohio Arts Council 2015 Ohio Heritage Fellowship for Material Culture. In his drum-making, he uses wood and other materials imported from Africa and follows traditional hand-crafting methods, building each drum himself. Teaching at local schools, Harris uses his “One World Rhythm” workshop to demonstrate how science and music come together. He has also conducted drum-making workshops, held art education residencies throughout Ohio, and founded the Heartbeat Drum Circle, Ohio's largest annual public drumming event. The Heartbeat Drum Circle brings together over 300 drummers from around the United States, making it an important social gathering in Cleveland. Baba Jubal teaches his “One World Rhythm” classes for BMSA at senior centers, schools, and after school programs.